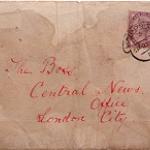 A letter written by a person claiming to be the serial killer that swept through London from 1888-1891. The letter is the first instance of the naming of the murderer, when he signs his name "Jack the Ripper." 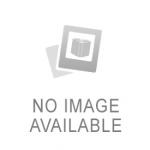 Desiderato
William Johnson Cory
Description:
Text:
"Oh, lost and unforgotten friend,Whose presence change and chance deny;If angels turn your soft proud eyeTo lines your cynic playmate penned, Look on them, as you looked on me,When both were young; when, as we wentThrough crowds or forest ferns, you leantOn him who loved your staff to be; 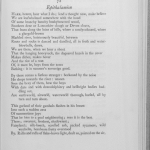 Hopkins originally began this apparently-unfinished fragment about male beauty as an ode to his brother, on the occasion of his brother’s marriage in 1888. Hopkins may have written the poem while he was supervising a student exam at the Royal University of Ireland (Bridges 123-124).

Text:
HARK, hearer, hear what I do; lend a thought now, make believe We are leafwhelmed somewhere with the hood Of some branchy bunchy bushybowered wood, Southern dene or Lancashire clough or Devon cleave, That leans along the loins of hills, where a candycoloured, where a gluegold-brown Marbled river, boisterously beautiful, between 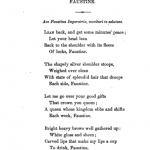 Faustine
Algernon Charles Swinburne
Description:
Text:
Ave Faustina Imperatrix, morituri te salutant. Lean back, and get some minutes' peace ;   Let your head lean Back to the shoulder with its fleece   Of locks, Faustine. The shapely silver shoulder stoops,   Weighed over clean With state of splendid hair that droops   Each side, Faustine. 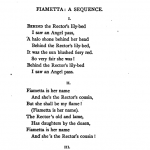 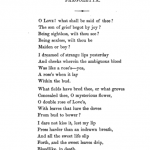 Fragoletta
Algernon Charles Swinburne
Description:
Text:
O LOVE ! what shall be said of thee ? The son of grief begot by joy ? Being sightless, wilt thou see ? Being sexless, wilt thou be Maiden or boy ? I dreamed of strange lips yesterday And cheeks wherein the ambiguous blood Was like a rose's—yea, A rose's when it lay Within the bud.

From "Rose Leaves When the Rose Is Dead"
Mark André Raffalovich
Description:
Text:
"I.Give me the words of once upon a time,So long ago your voice is not the same,Your lips have altered : but the rose trees climbStill to the window where the morning cameAnd called himself Delight, that left off name,And all teh East was noisy all at once.If to the nesting place the sure bird runs, 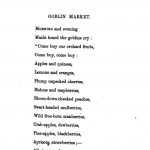 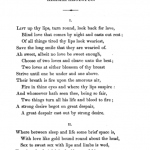 Hermaphroditus
Algernon Charles Swinburne
Description:
Text:
I. LIFT thy lips, turn round, look back for love,   Blind love that comes by night and casts out rest ;   Of all things tired thy lips look weariest, Save the long smile that they are wearied of. Ah sweet, albeit no love be sweet enough,   Choose of two loves and cleave unto the best ;   Two loves at either blossom of thy breast

Hyde Park --November
Marc- Andre Raffalovich
Description:
Text:
Pale love, sweet sufferer whose cold hands I chafe, To whom my show of courage courage lends, How do they love whose love is always safe, Sure of the base approval of their friends? Slaves, masters of their poor world's poor delight, Obedient, popular and prosperous,

I Love Him Wisely
John Gambril Nicholson
Description:
Text:
I love him wisely if I love him well, And so I let him keep his innocence I veil my adoration with pretence Since he knows nothing of Love's mystic spell; I dare not for his sake my passion tell Though strong desire upbraid my diffidence; -- To buy my happiness at his expense

I Promise Nothing: Friends will Part
A. E. Housman
Description:
Text:
"I promise nothing: friends will part; All things may end, for all began; And truth and singleness of heart Are mortal even as is man. But this unlucky love should last When answered passions thin to air; Eternal fate so deep has cast Its sure foundation of despair." 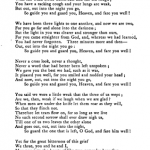 Samuel Butler, a Victorian Era author and a closeted homosexual, wrote this poem in 1895 after the departure of his close friend (and possible lover), Hans Rudolf Faesch.  However, Butler withdrew it from the public world because he was afraid that his poem, with its subtle homoerotic themes, would expose his sexuality.  The poem was not published until after Butler's death by another close friend of his, Henry Festing Jones. 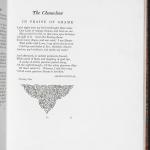 Lord Alfred Douglas published this poem in praise of queer desire in Oxford's undergraduate literary journal. It was later used as evidence against Oscar Wilde in the first criminal trial.

Text:
Unto my bed last night, methought there came Our lady of strange dreams, and from an urn She poured live fire, so that mine eyes did burn At sight of it. Anon the floating flame Took many shapes, and one cried, 'I am Shame That walks with Love, I am most wise to turn Cold lips and limbs to fire; therefore discern 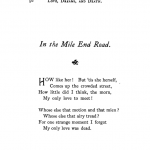 Text:
HOW like her ! But 'tis she herself,   Comes up the crowded street,How little did I think, the morn,  My only love to meet !Whose else that motion and that mien?   Whose else that airy tread ?For one strange moment I forgot

It was deep April
Michael Field
Description:
Text:
It was deep April, and the morn      Shakespere was born; The world was on us, pressing sore; My Love and I took hands and swore,      Against the world, to be Poets and lovers evermore, To laugh and dream on Lethe's shore, To sing to Charon in his boat, 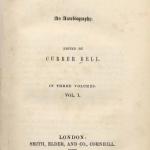 Jane Eyre, An Autobiography
Charlotte Bronte
Description:
Text:
"I tell you I must go!" I retorted, roused to something like passion. "Do you think I can stay to become nothing to you? Do you think I am an automaton? — a machine without feelings? and can bear to have my morsel of bread snatched from my lips, and my drop of living water dashed from my cup? Do you think, because I am poor, obscure, plain, and little, I am soulless and heartless? 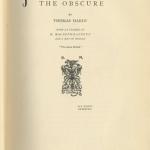 Jude the Obscure is a novel previously begun and completed as a serial in Harper's New Monthly Magazine. It tells the story of Jude Fawley and his relationship with Sue Bridehead--his cousin and also his love interest. The romantic relationship of the two weave in and out of their separate marriages, divorces and remarriages with each of their other partners. Interestingly, even after they get together, the two spend some time together without any sexual relationship, in respect of Sue's preference. Eventually they do come to sleep together, but although they have two children, they never get married to each other at any point in the duration of their lives.

Thomas Hardy wrote and published the book after Tess of the d'Urbervilles, and in publishing it as a book after the serialization, made some edits to the manuscript to reflect the looser constrainsts of keeping it "decent" for the expectations of the magazine for which he had written it. Although after the book's critical reception he focused mostly on poetry, he did reprint the novel as a second edition after some revision, on 1912.

* The image features the title page of the first edition, and is followed by the postscript Thomas Hardy had added in the second edition in response to some of the criticism he had received in regards to marriage.

Text:
‘But you haven't answered me. Will you let me go away? I know how irregular it is of me to ask it—’ ‘It is irregular.’ ‘But I do ask it! Domestic laws should be made according to temperaments, which should be classified. If people are at all peculiar in character they have to suffer from the very rules that produce comfort in others! … Will you let me?’ 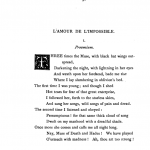 L'Amour De L'Impossible
John Addington Symonds
Description:
Text:
I.Procemium THREE times the Muse, with black bat wings outspread,   Darkening the night, with lightning in her eyes   And wrath upon her forehead, bade me rise   Where I lay slumbering in oblivion's bed. The first time I was young ; and though I shed   Hot tears for fear of that great enterprise, 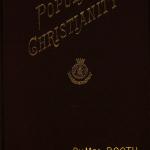 Popular Christianity is a compilation of sermons given by the esteemed Catherine Booth two years before her death in 1890. I could only find images of the text from the third edition, which was published in 1891. These passages are from her second lecture. Although Booth condemns desires that fall outside of Christian morality, her unusual positions on child sexuality, the hypocrisy of Christian "intellectuals," and what she deems "mock salvation" remain fascinating to parse.

The decision to use Booth's formal title (did the author or the publisher make that call?) both asserts her stature as a co-founder of The Salvation Army and a respected minister and reminds the reader that she is the wife of a man who boasts the same credentials. How utterly in line with Christian feminism. 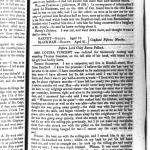 "LOUISA VINCENT, Breaking Peace > wounding, 25th October 1847" is the transcript of a court case proceeding that took place at the Old Bailey in London.  This case includes many lurid details (abuse, prostitution, illegitimacy, attempted murder) that would catch the eye and capture the imagination of Victorian readers.

Text:
2490. LOUISA VINCENT was indicted for feloniously cutting and wounding Thomas Soarston, on the left side of his head, with intent to do him grievous bodily harm. 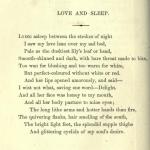 Algernon Charles Swinburne's "Love and Sleep" published by Poems and Ballads, First Series in 1866, depicts sexual desire for the opposite sex in an aggressive manner.  Swinburne's word choice and desire elicits an image of his lover's features as well as his anticipations.

Text:
Lying asleep between the strokes of night   I saw my love lean over my sad bed,   Pale as the duskiest lily’s leaf or head, Smooth-skinned and dark, with bare throat to bite, Too wan for blushing and too warm for white,   But too perfect-coloured without white or red.   And her lips opened amorously, and said— 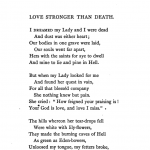 Agnes Mary Frances Robinson published this poem in her 1878 collection A Handful of Honeysuckle about being separated from her female lover in death. A few years later, Robinson developed a relationship with Vernon Lee (Violet Paget) that continued until 1888.

Text:
I DREAMED my Lady and I were dead   And dust was either heart; Our bodies in one grave were laid,   Our souls went far apart, Hers with the saints for aye to dwell And mine to lie and pine in Hell. But when my Lady looked for me   And found her quest in vain, For all that blesséd company   She nothing knew but pain. 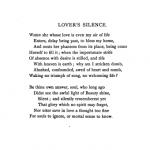 Agnes Mary Frances Robinson's poem is included in the second printing of "The Crowned Hippolytus". The poem is referring to her relationship with Vernon Lee (Violet Page).